Throughout life’s musical journey we uncover the music that helps define certain moments of clarity, reflection, nostalgic reminiscence, happy and sometimes sad memories. We learn about the musicians who help create those memories for us and carry it with us in our minds, and in our hearts and souls. As teachers of music at Jenca, it is part of our job to help convey, educate and hopefully inspire our students to embrace this music and further it in their own creative musical journey.

With that in mind, we would like to use this platform to promote and flaunt some of our personal choices of songs, be it Magnum Opus’s, 3-minute aural explosions of musical energy and power, or once in a lifetime epiphany-inducing moments:

Growing up in England in the 1960’s afforded me and my generation the privilege of being part of something very special in the evolution of rock and roll music. The fact was, we were so spoilt for choice and I’m sure most of us didn’t realise how good we had it until we could reflect on it decades later.

We had everything, from Rock, Pop, Funk, Motown, Heavy Metal, Prog Rock, Jazz Fusion, Disco, Northern Soul, Reggae, New Wave, Ska and the musical movement that shook the whole music industry up – Punk Rock, which exploded onto the British music scene in the mid 1970’s.

Initially spawned by American bands likes of The New York Dolls, MC5, Iggy & The Stooges and The Ramones, it emerged writhing and bristling with energy and attitude when bands like The Sex Pistols, The Damned and The Clash staked their claims as the new voice of a generation.

For me as an impressionable 15 year old in 1976 looking for something to identify with, like all rebellious teenagers, these bands were our salvation.

Because I had grown up surrounded by such a diversity of musical genres and styles I tended to delve into the punk rock scene rather than immerse myself entirely as I enjoyed the music of so many other bands at the time. However I loved The Clash above all the other bands plying their wares as punks.

I was privy to a few of their dynamic and incendiary performances in 1977 and 1978. The Clash were a sheer undeniable force of nature spearheaded by the self-proclaimed punk warlord Joe Strummer.

Joe was for me so exciting to watch perform live, he seemed to play his guitar with such ferocity, his right hand and pneumatic right leg working up and down in tandem like some motorised full speed ahead metronome. He would spit out the words to their songs with such venomous intent, invariably about the plight of the nation and current political misgivings of, not just the UK, but the world as a whole.

Joe’s political leanings have been well documented over the years and not without validation – human rights, anti- fascist and anti -racism views were all part of what made this band so vital.

Musically The Clash’s legacy cannot be underestimated and to this day they are still held in high regard by so many of their peers ( Bruce Springsteen, Manic Street Preachers, Green Day, U2, Bad Brains, Massive Attack, Arctic Monkeys, The Strokes, White Stripes, Rancid, Libertines, Public Enemy ) and a legion of fans worldwide. In their relatively short career they cross pollinated so many musical genres and sub genres including Punk, Rock, Reggae, Dub, Ska, Funk and Rockabilly,

Joe continued to write great songs and perform after the demise of The Clash with his last band The Mescaleros  until his untimely death at just aged 50.

Over the years The Clash’s legacy remains intact, their music has not diminished and the fire still burns bright for this group so often referred to as “The Only Band That Matters”.

I had real difficulty in choosing just one song that represents The Clash to their fullest – there are so many great ones – White Man in the Hammersmith Palais, London Calling, Straight To Hell, Armagideon Time, Complete Control to name a few.

Here’s a video of The Clash performing at the Music Machine in Camden, London in 1978 with a sweat-soaked Joe Strummer giving his all with such passion and vitality. Please note there is brief use of profanities during this video 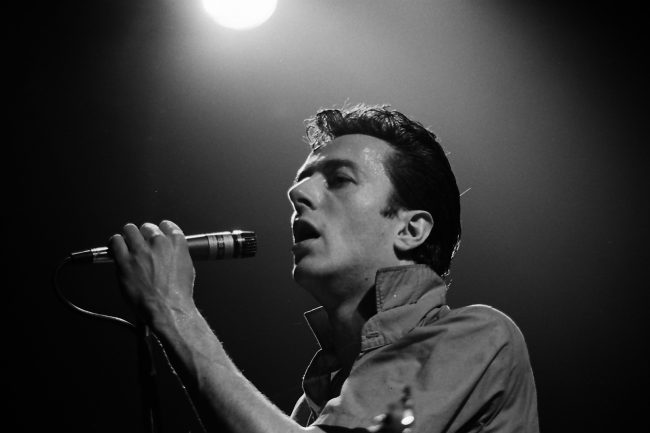